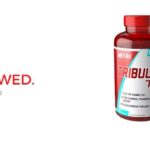 Met RX Tribulus is a single-ingredient supplement that comes in a bottle of 90 capsules and claims to be “the original powerlifters secret”. As you’ve guessed it, the only active ingredient in this product is Tribulus Terrestris. All of the benefits you’ll get from using these supplement come from this ingredient.

So, what does Tribulus 750 do? Well, the manufacturers don’t say much. They just say that it’s been lab tested to ensure it supplies you with 40% Saponins per serving, which are its active ingredients. The marketing material of Met RX also claims that Tribulus was originally used by Russian powerlifters in the past, and is now used by “athletes around the world.”

But for what purpose? They don’t tell us about any concrete benefits that their product offers. With that being said, Tribulus is mostly marketed as a testosterone and strength building supplement, which is what these claims by Met-RX suggest.

So, how good is Tribulus at boosting the male hormone? Is it safe? Can it actually boost your energy levels and help you get more out of your workouts? Well, as you’ll see below, it’s not that great. Tribulus’ main strength is libido and prostate health, which some people confuse with testosterone boosting – it doesn’t do that.

What’s Inside the Formula?

Each capsule of Met-RX Tribulus 750 provides you with 750mg of Tribulus Terrestris standardized to 40% Saponins. That translates to 300mg of Saponins per capsule.

You’ll also notice several “other ingredients” on the label, which include: Gelatin, Cellulose (Plant Origin). Contains <2% of: Croscarmellose, Silica, Vegetable Magnesium Stearate. Basically, these ingredients don’t provide any effects, they’re included mainly as fillers. Generally speaking, the fewer “other” ingredients on the label you see, the cleaner the product is.

As far as Tribulus Terrestris goes, this is a plant originally used in Ayurveda medicine. Its roots and fruits are used to boost male vitality and virility. The roots are known to boost libido and sexual health without affecting testosterone or muscle strength. The fruits of Tribulus Terrestris, which Met-Rx supplement uses, are mostly known for their prostate health benefits. They might also be good for stress, according to Examine. But they don’t boost libido.

How it Could be Better

Okay, so there are a few things that would Make Met-Rx Tribulus 750 a lot better.

In terms of Tribulus itself, it’s delivered as “fruit” extract, which is good if you want to improve your prostate health. However, the fruits don’t offer many more benefits. It would be better to use Tribulus Root as that’s the part of the plant that has libido-boosting effects.

Now as far as testosterone boosting and muscle building is concerned, Tribulus Terrestris won’t help you much. Because it’s shown to be ineffective in this regard.

So in that sense, we would like to see at least 2-3 proven testosterone boosting ingredients included in Met-Rx formula, such as:

These are all great libido boosters too, which is why best male health formulas use them. In addition, ingredients like Ashwagandha have been suggested to boost muscle strength and growth directly, in addition to reducing catabolic stress hormones.

How to Use Met-RX Tribulus 750 (Dosage Instructions)

Met-RX Tribulus 750 doesn’t explicitly state how it should be used on the label. Generally speaking though, Tribulus Terrestris fruits have been used in the 2-3g dosage range, per day. Since it’s an extract, you can use a lot less, so 1 capsule per day should do.

Again, Tribulus Terrestris doesn’t have any effects on testosterone, so don’t expect it to do much in that regard. Even if it did boost the anabolic hormone, taking just one serving per day wouldn’t be enough to keep the ingredients circulating in your system for long enough to lead to any notable benefit.

In terms of side effects, Tribulus Terrestris is known to be a fairly safe compound. Some men reported having aggravated prostate from using it, but you should be aware that this is just anecdotal evidence. If you’re unsure about this supplement, or any supplement for that matter, you should have a chat with your doctor before using it.

Price and Value for Money?

Met-RX Tribulus 750 price varies depending on where you buy it. On Amazon, it costs around $9 per bottle. Similarly, the official website charges $12 for the 3-month supply.

That’s pretty cheap! However, we feel that the price reflects what this product does (or better said, doesn’t do). It is a fairly weak supplement, based only on Tribulus Terrestris which doesn’t appear as a particularly interesting compound. That said, if you’re having prostate issues, then it could be worth looking into.

So there you have it – that was our Met-RX Tribulus 750 review. What do we think about it? We think it’s a very targeted supplement for a very minor audience. Paricularly, men who’re having prostate problems and want to feel more comfortable in their daily life.

However, that’s about as good as it gets with Met-Rx Tribulus 750. It doesn’t offer much more! If you’re looking to increase your testosterone, build muscle, or lose fat, then this is definitely not the product for you.

Considering its cheap price though, you’ll like it if all you’re looking for is prostate health support.

For more reviews check our testosterone booster “get stronger” catalog.

You can also see our other Met RX Reviews:

This website uses cookies to improve your experience while you navigate through the website. Out of these cookies, the cookies that are categorized as necessary are stored on your browser as they are essential for the working of basic functionalities of the website. We also use third-party cookies that help us analyze and understand how you use this website. These cookies will be stored in your browser only with your consent. You also have the option to opt-out of these cookies. But opting out of some of these cookies may have an effect on your browsing experience.
Necessary Always Enabled
Necessary cookies are absolutely essential for the website to function properly. This category only includes cookies that ensures basic functionalities and security features of the website. These cookies do not store any personal information.
Non-necessary
Any cookies that may not be particularly necessary for the website to function and is used specifically to collect user personal data via analytics, ads, other embedded contents are termed as non-necessary cookies. It is mandatory to procure user consent prior to running these cookies on your website.
SAVE & ACCEPT